As the fake news media spews lies day-in and day-out, they’re dumping fuel on the anti-gun Left’s hatred for everything America stands for.

While the Left launches destructive riots, shoots cops in unprovoked attacks – and even recently attempted to shoot up President Trump’s Miami golf resort -– media elites constantly make excuses for them.

Instead, they blame you and me for daring to stand up for ourselves!

If freedom in America is to survive, you and I must continue to stand together against this constant swarm of attacks.

Today, gun-grabbers are more emboldened than ever, believing that after Governor Greiten’s problems, the Parkland, Florida and Santa Fe, Texas murders and the mad rush to gun control which ensued, Second Amendment supporters like you and me will just be too disillusioned to even bother showing up at the polls in November!

As you’ll see, I’ve prepared a special Second Amendment Turnout Pledge, letting me know you’re not going to just sit on your hands in November -– and instead vote to hold gun-grabbing politicians accountable.

Will you please sign and submit it back to our office at once? 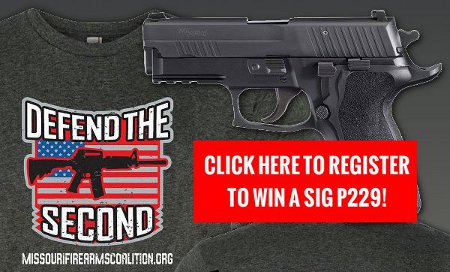 This is the gun the Secret Service uses to protect President Trump from the hordes of violent anti-gun leftists –- like the one who just attempted to shoot up the President’s Miami golf resort!

And if you can possibly make a contribution of $35 or more, I’ll rush you our newly redesigned Missouri Firearms Coalition member T-shirt and member decal as well!

As you may know, the Missouri Firearms Coalition has conducted special gun giveaways like this online on occasion, but rarely through the mail.

I’m doing so now because I need to gauge on Second Amendment supporters’ grassroots energy FAST.

So please sign your Second Amendment Turnout Pledge RIGHT AWAY!

As you know, mid-term elections are often decided by turnout. Gun-grabbers and their pals in the media believe they have the advantage.

So all over the country, Michael Bloomberg and his anti-gun pals are pushing a constant barrage of anti-gun attacks -– from Gun Confiscation Orders to so-called “Assault Weapons” Bans.

If they gain seats in Missouri this November, they’ll do all they can to push their radical agenda, including:

***  INSTITUTING SO-CALLED “UNIVERSAL BACKGROUND      CHECKS,” which is nothing more than code for      STATEWIDE GUN REGISTRATION. And registration is      always just the first step toward CONFISCATION.

***  BANS ON MAGAZINES to outlaw firearms that hold      more than just a handful of rounds.

I hope you agree we cannot allow this madness to happen. Instead, we have to FIGHT BACK now -– before it’s too late.

If you agree, I’m counting on your IMMEDIATE action:

Your generosity will be a big help to our election year plans, which are already being put into action.

Please understand that you’re a critical part of the Missouri Firearms Coalition’s winning team. But there’s more at stake for Missouri this year than ever before.

So please sign your petition right away -– and consider your most generous contribution of $100, $50 or whatever you can afford today!

P.S. Will you please sign and send in the Second Amendment Turnout Pledge that we’ve prepared for you?

If you do so, your name will be entered to win a special .357 Sig Sauer P229 on August 10 — the same gun the Secret Service uses to protect President Trump from the hordes of violent anti-gun leftists who threatened him.

And, if you can possibly make a contribution of $35 or more, I’ll rush you a newly redesigned Missouri Firearms Coalition Member T-shirt and decal!

Stand With Us in Defense of the Second Amendment and Pick Up Free Gear!