In 2016, when the Missouri Firearms Coalition passed Constitutional Carry and Stand-Your-Ground law, we encountered some disappointing opposition from Missouri peace officers.

They were worried that by Missouri making carry permits optional, they would lose money by not processing as many permit applications and running the required background checks.

Thankfully, we were able to overcome that difficulty with grassroots pressure, and Missouri now enjoys some of the best gun laws in the nation as a result.

But capitol insiders are warning us that with our Second Amendment Preservation Act (H.B. 1637) legislation on the move, the Missouri Sherriff’s Association and other associations may be preparing to attack this bill!

If this happens, it sure would not be the first time. If you’ve been around the fight for gun rights in Missouri for a few years, you’ll remember that in 2014, the legislature advanced a very similar bill that was vetoed by Governor Nixon.

Days before the crucial 1-day veto override session in Jeff City, the Missouri Sherriff’s Association came out with a vicious attack on the bill, leading to the Missouri Senate voting to uphold Governor Nixon’s veto.

And so while we can’t confirm when/how this attack is coming, with the Sheriff’s Association’s lobby day taking place on Wednesday — and given their history of opposing this bill — we can’t take anything for granted!

In so doing, SAPA legislation would protect Missouri peace officers from having to decide whether to uphold their oath of office or enforce federal gun control.

It’s sad, frankly, that we can’t count on the Missouri Sheriff’s Association to be fighting along side of us, to defend our Constitutional freedoms.

Afterall, that’s exactly what they are there for, to uphold our glorious constitution!

What’s more, in other states where the gun control battle is raging right now, pro-gun sheriffs are doing exactly that!

In Virginia, where the gun control battle is raging right now, Culpeper County Sheriff Scott Jenkins recently made national news for vowing to deputize every law abiding gun owner in his county, if that’s what it takes to resist Governor Northam’s gun control agenda! 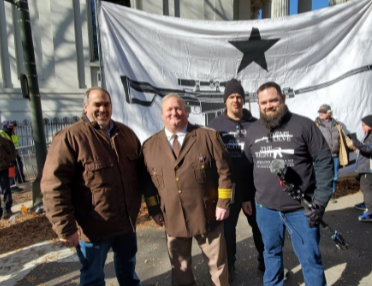 (Aaron Dorr (L) and members of the MOFC team with Scott Jenkins, the Sheriff of Culpeper County VA, at a Richmond, VA gun rights rally earlier this year.)

This is what pro-gun Sheriffs are doing in other parts of the country, while here in Missouri, they are preparing to attack the Second Amendment Preservation Act — once again!

Please help us fight for SAPA legislation immediately, by:

It doesn’t matter if you’ve sent this email before, please do it again, and don’t let up!

We have a real chance to make a massive advancement in our Second Amendment freedoms here in Missouri with H.B. 1637, but it won’t happen if we let up on the pressure.

And if you can chip in $10 to help us fight in Jeff City, feel free to do that here.

P.S. The Second Amendment Preservation Act (SAPA) is on the move in Jeff City, with over 80 cosponsors and the committee hearing behind us.

But insiders report that the Missouri Sherriff’s Association may attack this bill, as early as THIS WEEK during their annual lobby day!

Don’t let them get away with it! Contact your Sheriff and tell him to stand up for the Second Amendment and SAPA legislation and insist that he call the Sheriff’s Association and get them to back off this bill!

Use this link to find your sheriff’s info.

Then email the General Laws Committee, right away, and urge them to move the bill out of their committee!

Not a member, join here.
Already a member, donate here.