Last week, as MOFC staff testified in support of HB630 in the House’s newly-formed Second Amendment Committee, it was obvious that this committee has been hearing from you!

While anti-gun legislators did their best to try to paint this bill as reckless and unnecessary, they were not successful.

MOFC’s Political Director Alexandra Salsman gave clear and compelling testimony on why this legislation is so badly needed — before a tragedy strikes Missouri.

Not only that, but MOFC members and supporters were on hand from all over the state testifying in support of this bill as well!

So whether you called, emailed, messaged the committee on Facebook, or testified in the sub-committee, I’d like to thank you.

But it wasn’t all good news in Jefferson City, as Michael Bloomberg’s front-group was on hand and hammering away on the committee as well.

You see, Bloomberg’s people are still furious after you and I made sure that Constitutional Carry and Stand-Your-Ground legislation became law here last year!

But they know that if they can limit the number of places where you and I can carry — by having them declared ‘Gun Free Zones’ –- they may still have the last laugh. 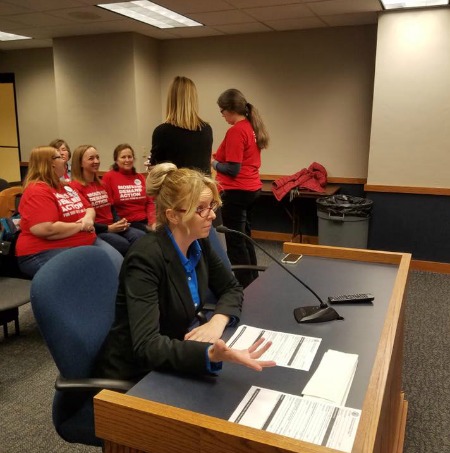 Since it was a hearing only, no action was taken on this bill.

The committee will be making a decision on this in the near future, and are still weighing public support of this bill.

That’s why I need you to contact the committee right away, and remind them that NYC billionaire Michael Bloomberg doesn’t speak for gun owners here in Missouri!

Insist that they recommend a “Do Pass” on this bill and move it on to the next committee!

As a reminder, HB630 would simply remove the dozens of ‘Gun Free Zones’ on the books here in Missouri, as long as the federal code permits it.

This includes lifting the current ban on carrying in places like: churches, colleges, day cares, mass transit systems, and more!

Everyone knows that it’s ‘Gun Free Zones’ just like the ones listed above that are the favorite targets of psychotic criminals who are looking to target innocent people.

So please contact the members of this committee right away and urge them to pass HB630 out with a “Do Pass” recommendation and with no weakening amendments!

You can call them, email them, or send them a message on Facebook using the information provided above.

But please take action fast -– the session clock is starting to tick loudly and we can’t afford too many delays.

And please make a contribution to MOFC right away, so we can continue to mobilize gun owners using social media, direct mail, and more!

P.S. Last week, MOFC staff and members all testified in support of HB630, our legislation to end the dozens of ‘Gun Free Zones’ on the books here in Missouri!

But we weren’t alone, and Michael Bloomberg’s front-group was also present, doing their best to stop this bill.

The committee considered the bill, but hasn’t voted on it yet.

That’s why I hope you’ll contact the committee again, using the information above, and make sure they know that Michael Bloomberg doesn’t speak for gun owners here in Missouri!

When you’re done, please make a contribution of any amount to the Missouri Firearms Coalition, as we’re working around the clock to advance this bill in the Capitol and need to mobilize as many gun owners as possible.

It Starts in One Hour in Jeff City!

Committee Vote on HB630 This Tuesday?!